Tru-I indexing is the name given to the whole Electron Backscatter Diffraction (EBSD) pattern indexing process in AZtecHKL, from band detection to solution. This page provides some background information into the ways these processes work, from details about the band detection process (including the concept of weighted band detection and the “Optimized Band Detection” option that is available in the software), as well as the basics of the indexing process (referred to as “Class Indexing”).

There are also additional indexing techniques within AZtecHKL that are dedicated to providing improved solutions for specific application cases. These include:

Details on all of these above processes can be found below.

Band detection is a fundamentally important aspect of EBSD analysis and is critical in terms of data quality. Improvements in band detection can increase the number of correctly indexed points (and thus reduce the reliance on post-acquisition clean up processes), especially for materials that produce weak diffraction patterns with indistinct Kikuchi bands. This will benefit the characterisation of highly strained materials, complex phases (such as many minerals) and also applications with unusual projection geometries, such as off-axis transmission Kikuchi diffraction (TKD).

The standard process of band detection using the Hough transform has been introduced in the EBSD Explained section (see here), and this process underpins the standard band detection approach within AZtecHKL. However, there are 2 additional developments within AZtecHKL that ensure high quality band detection, even on challenging EBSD patterns, thus ensuring robust and reliable indexing. These are described below.

In AZtecHKL, the system will automatically determine which of the detected Kikuchi bands in each pattern are best used for the indexing process. This involves applying a weighting function based on the band’s average intensity and the position of the band within the “area of interest” (the user-defined area used for band detection). A higher priority is given to those bands at or near the centre of the area of interest: these bands will usually be more reliably detected, thus making the indexing process more robust. The weighted band detection process is illustrated in the example below. 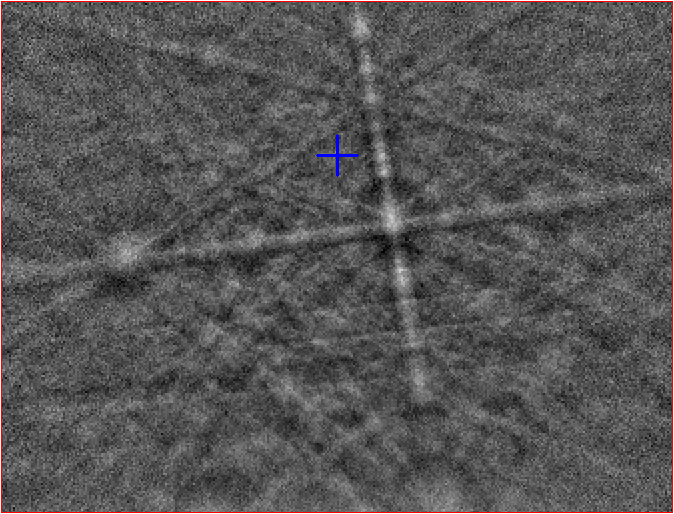 Example EBSP from a silicate mineral. 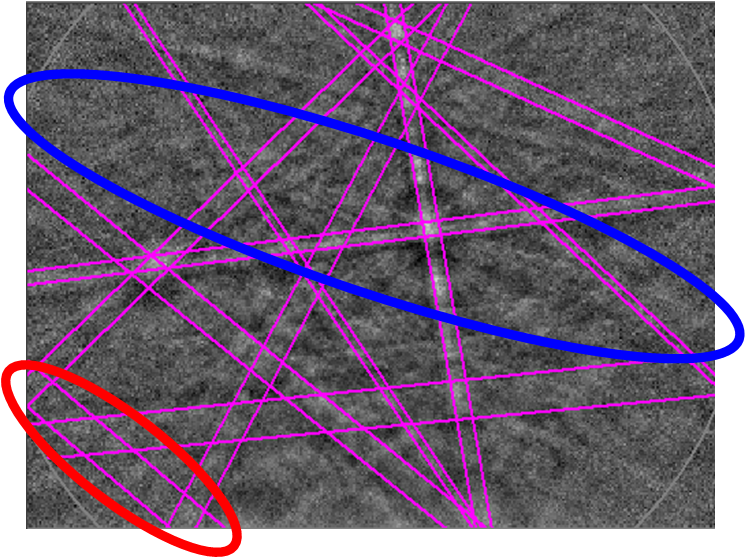 Standard (non-weighted) band detection. Note detection of Kikuchi bands at the edge of the area of interest (red area). 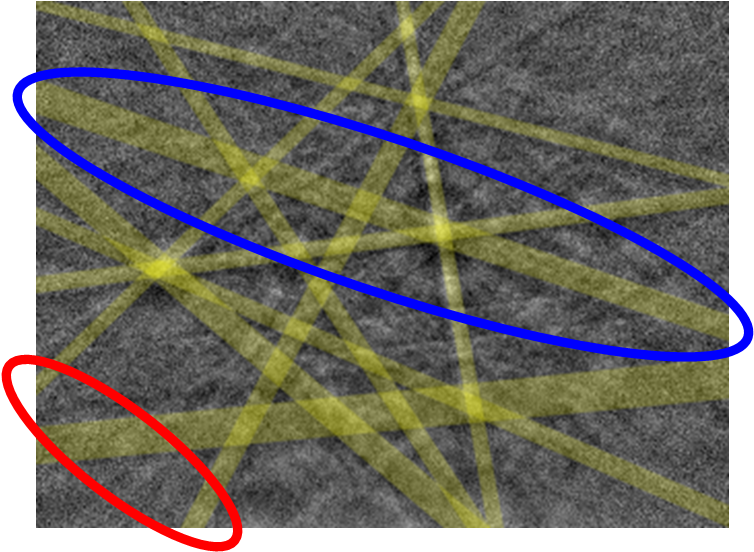 Weighted band detection. Preference is given to more reliably detected Kikuchi bands closer to the centre of the EBSP (blue area).

With the introduction of transmission Kikuchi diffraction, TKD, in the years 2010-2012, it became clear that the unusual projection geometry that was required for off-axis TKD measurements caused issues with standard EBSD band detection algorithms. Since the diffraction pattern was projected from the underside of an electron transparent sample, the pattern centre (i.e. the closest point to the beam-sample interaction point on the plane of the phosphor screen) would often be located off the top edge of the phosphor screen. This had the effect of making Kikuchi bands in the lower part of the EBSP appear unusually broad: in the Hough image, such bands would be almost indistinguishable as single peaks, and the band detection algorithm would often incorrectly identify the excess line (the bright upper edge of the Kikuchi bands) as the band centre. This would lead, at best, to slight orientation errors in the indexing and, at worse, to completely incorrect solutions or no solution at all. An example TKD pattern from a deformed Al alloy is shown below, along with the results using a standard band detection process. 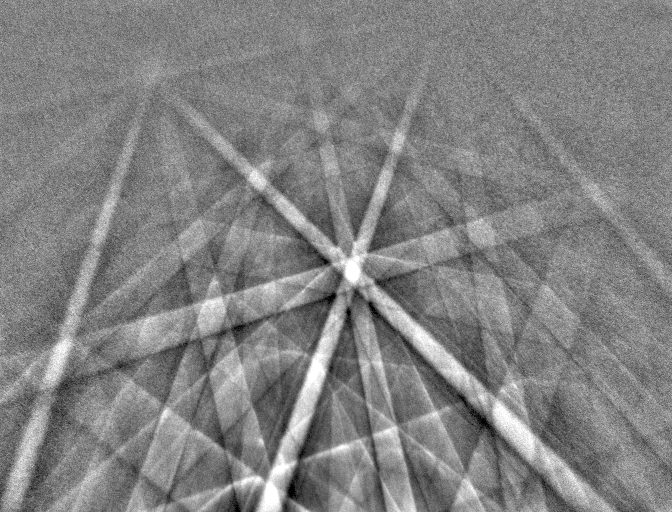 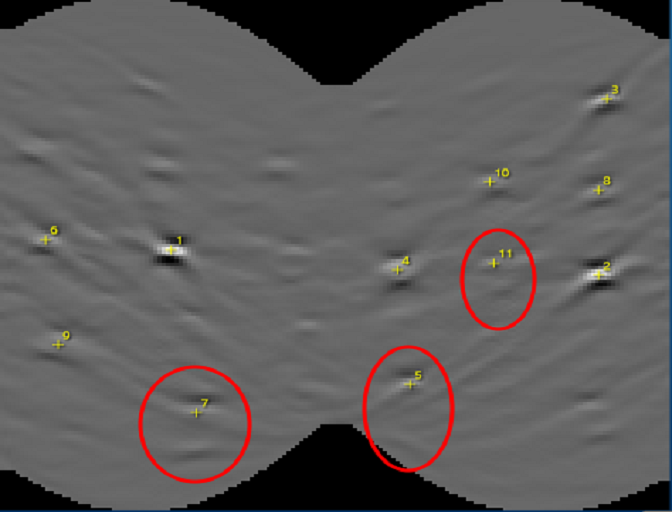 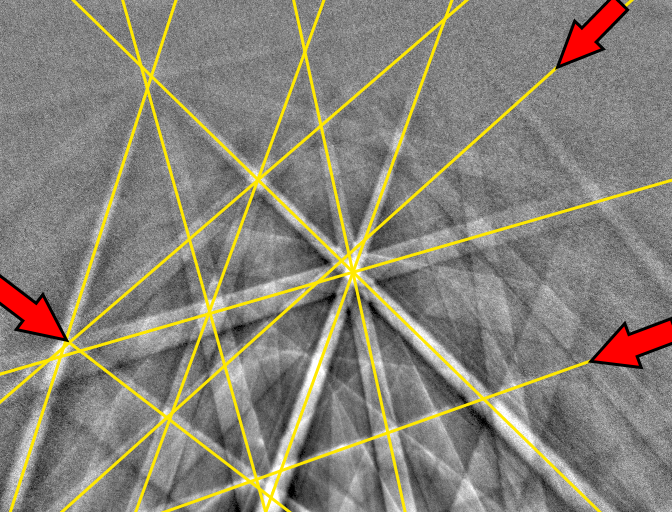 Detected band image, shows that these 3 peaks correspond to the bright upper edges (the excess lines) of broad Kikuchi bands, marked with the red arrows

Although the unusual geometry of TKD patterns will cause more frequent problems due to conventional band detection processes, these problems will also be apparent in standard EBSD analyses, especially with phases that produce unusually broad Kikuchi bands or materials that suffer from significant excess and deficit lines in the diffraction patterns (such as diamond).

In response to this problem, Oxford Instruments developed a new optimised band detection routine. The algorithm follows these steps:

The example below shows how this optimised band detection process delivers more reliable results using the same TKD pattern as shown above. 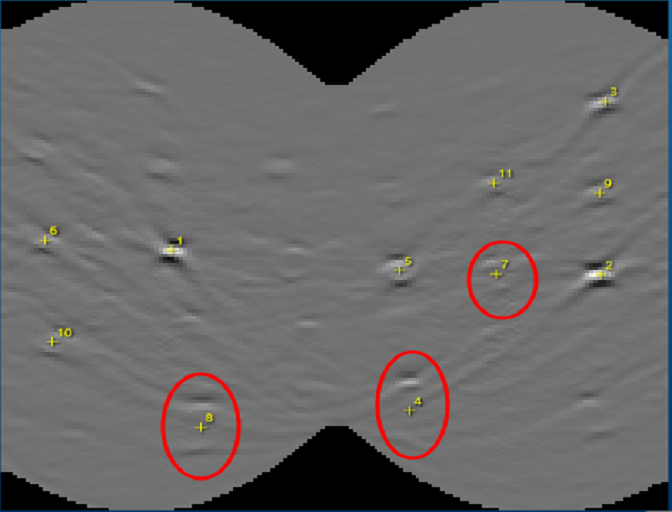 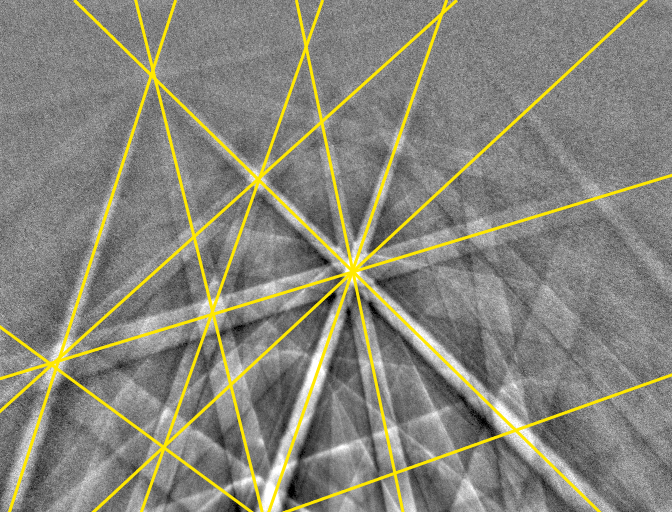 Detected band image, shows that all the Kikuchi band positions in this pattern have been reliably detected, resulting in precise and robust indexing 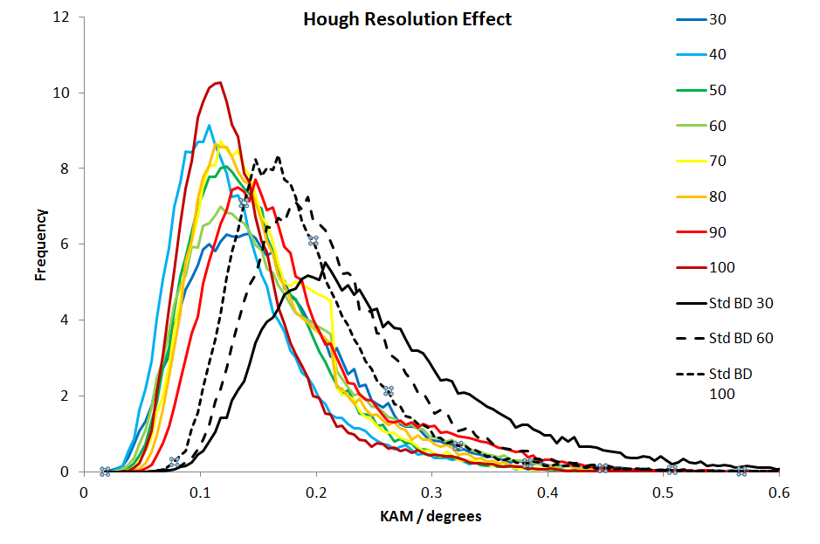 The indexing routine is critical in achieving accurate data. The challenge for an EBSD system is to achieve a high validated hit rate without generating false positive solutions, where EBSPs are solved but with the wrong solution. Automated routines can be very sensitive to non-fitting bands, such as those occurring at grain boundaries where the imaged diffraction pattern is actually a superposition of 2 different diffraction patterns, corresponding to the grains on either side of the boundary. The indexing algorithm must be robust enough to handle any inaccuracies arising from the band detection. The relative advantages and disadvantages of pattern matching techniques, such as Dictionary Indexing or Spherical Indexing, have been discussed in the “Techniques for Indexing” page, but here we focus on conventional Hough-transform based indexing.

AZtecHKL uses a robust indexing method termed “Class Indexing”. This utilises groups of 4 bands at a time (it could also be referred to as “Quadruplet Indexing”) and considers the band coherence (where the measured bands and reference crystal reflectors are in agreement) and non-coherence (where the measured bands and the reference crystal reflectors are not in agreement). These 4-band combinations enable the indexing routine to break the solutions into smaller blocks, which are then the foundations of the indexing. Using this method, the routine is far more robust and can find the correct solution, even when one or more bands are non-coherent.

Why use 4 band groups?

The use of groups of 4-bands, unlike other algorithms that use 3-bands, is simply a question of maths. The number of permutations of 3-band and 4-band groups (triplets and quadruplets) that can be derived for a set number of bands detected is shown in the table below.

For any EBSP in which more than 7 Kikuchi bands are detected, there are more 4-band permutations than 3-band permutations. This means that there will be less noise in the indexing and a greater chance of a robust and reliable solution.

How many bands to detect?

The user interface in AZtecHKL allows the number of detected bands to be set from a minimum of 6 to a maximum of 12. As can be seen in the table in the previous section, detecting a higher number of bands will give more 4-band groups for the software to consider and will typically result in more accurate and robust solutions. Therefore, it is recommended to set the band detection to somewhere between 10 and 12 bands to give the best results and the greatest benefit from the Class indexing approach.

Therefore, by detecting a higher number of bands, the software will permit a greater number of these not matching with the final solution, providing better indexing along the grain boundaries (as shown in the following section).

In EBSD datasets, most unindexed points lie along grain boundaries where the indexing algorithm was unable to deconvolve the Kikuchi bands belonging to the diffraction patterns of the 2 orientations. The Class indexing method is much better at accommodating overlapping patterns, and generally, the solution from the dominant group of bands (i.e. from one side of the boundary) supersedes the wrong four-band combinations, including representative bands from either side of the boundary. As a result, grain boundaries are more accurately resolved, and there are fewer non-indexed points, as illustrated in the following figure. 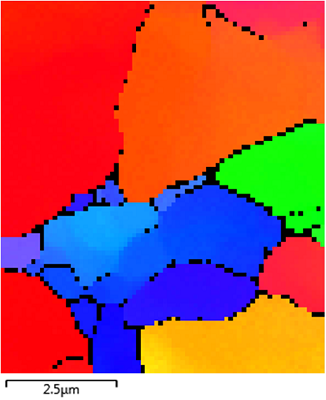 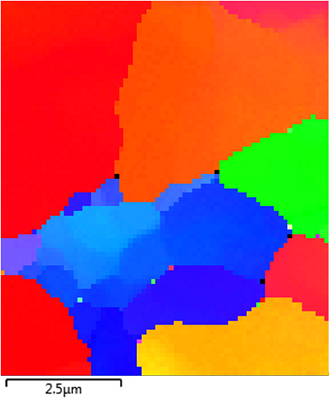